This new work in the ‘Patient Sitter Series’ for the Waterside 1-0 commission, is inspired by work produced by the American artist Winslow Homer. In 1881 he took a trip to a small fishing village called Cullercoats, near Newcastle and stayed nearly two years, producing over 150 works. It is said his painting was transformed by the experience. His work shows the natural elements but also his captivation by the local women and their harsh lives. In the BBC radio 4 documentary (17 Nov. 2014), ‘Winslow Homer’s – Odyssey’ about his time in Cullercoats, Martin Smith comments that eventually, ‘…everything is reduced to woman and sea……’ 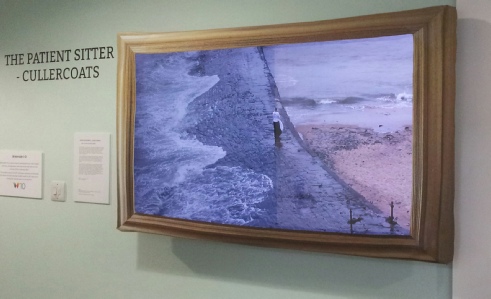 ‘Unbroken by their environment, they stand against the turbulent sea, their postures embodying strength, pride and endurance; only their clothes are moved by the wind.’                ‘Thousands of townsmen, jaded of eye, of heart, of spirit, have, like myself stood before these pictures and seemed to hear the far-off sea grow louder day by day.’          ‘Silhouetted against the broad sky, they are at risk in a nature that is uncontrollable and inscrutable. In their contemplation of the horizon, they direct the viewer to speculate about what lies beyond it’          ‘In winter the cullercoats landscape seems to abstract itself into the basic elements of sea, sky and land, making the figures who move across its unrelenting terrain seem heroic.’

Credits    All quotes are from ‘Winslow Homer in England’ by Tony Harrison (Hornby Editions, 2004),